Raiders of the Lost Arc

Which contestants have improved...and regressed...the most during their Idol runs?

Familiarity, it's been said, breeds contempt.  Perhaps that's true when the subject is political candidates, obnoxious celebrities, or overly cloying Reality TV show judges.  But is it also the case for American Idol contestants?

On this spectacularly beautiful Mothers' Day (at least here on the U.S. East Coast), we've set out to ponder that question.  Ironically, the inspiration for this came from halfway around the world: namely, our friend The Idol Guy, who mused:

"Is there any sort of correlation between how far along we are in the Idol season and WNTS rankings? I've been half-wondering about any contestants who 'knew how to peak at the right time,' like Haley Reinhardt, but I'm not sure there is.

It's true that the typical contestant's approval rating tends to degrade somewhat over time.  Readers of our annual, whimsical summer feature Camp Should-A-Been already knew this, because when a singer survives at camp beyond his or her actual elimination date on the show, we have to calculate projected ratings for them from that point forward.  This "decay curve" invariably trends downwards, because that's what almost a decade of WNTS data indicates.  (The precise amount is adjusted pre-camp every June, but it's always been between 8% to 10% per performance.)

Does this mean the typical Idol tends to sing worse every time out?  Of course not.  It does, however, suggest that over the long AI slog, America will begin to tire of a contestant.  Sometimes it's by natural fatigue (this is particularly true for country singers, we'd opine), other times it's dissatisfaction over a perceived lack of growth arc, and occasionally it's a vocal minority of the web expressing louder and louder outrage that a contestant they dislike has survived for as long as he or she has.  Familiarity might not breed actual contempt on American Idol, though "Get the %^&*@ off my TV screen!" serves as a pretty close substitute. 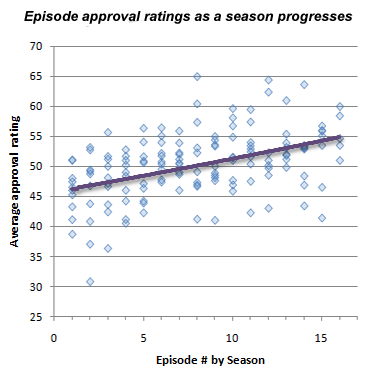 Do not make the mistake of inferring that earlier episodes in a season are better-liked than later ones.  Precisely the opposite is true, as the nearby scatterplot shows.  In fact, while the average contestant's rating is sliding, the average episode rating is rising by a not-too-shabby 7/10ths of a point per week.  A moment's thought easily explains this: as weaker contestants are eliminated, the strength of the remaining pool increases, even if their individual ratings might be trending slightly downwards.

So let's go back to TIG's intriguing thoughts about Idol contestants peaking at the right time.  How many late bloomers have there been on the show; i.e., ones whose approval rating trendlines actually *increase* over the course of the season?  Is Reinhart one of them?  What contestant has shown the most improvement over his or her Idol run?  And, perhaps most importantly, do contestants whose "growth arc" trends upward have an advantage when it comes to making the Finale, or even winning?

To learn the answers, we ran a regression analysis on the series of performances by every American Idol contestant who performed at least five times.  There are 98 of them in all, and as usual, in the interests of science and good taste, we'll ignore reprise performances and anything eminating from a Finale episode.  We'll also spare you a massive, unreadable scatterplot of 98 criss-crossing arcs.  Instead, we'll just list each contestant by the slope of their linear trendline – a positive number indicates a long-term increase in approval ratings.  Let's see what that tells us.  (...Hmm...you know, the last time we undertook a project like this, about a month ago on song freshness, we were shocked and a little red-faced that none other than Kristy Lee Cook was the all-time Idol best.  But, heh-heh, why worry - what're the odds that lightning would strike twice in a row?)

It turns out that, at least according to our web approval ratings, Reinhart has plotted the second-greatest week-to-week growth arc in American Idol history.  On average, she improves by four points every performance.  That's better than 96 of her 97 fellow Idol travelers...but once again, a certain horse trainer from Oregon is unexpectedly leading the pack.  Okay, now we're really getting weirded out.

Actually, upon further reflection, KLC's +4.10 arc seems reasonable to us.  It's important to keep in mind that Cook was, ah, not terribly impressive in her first appearance under the Idol spotlight.  Or her second...or her third...dear God we don't even want to THINK about her fourth...or her fifth for that matter....  In fact, Cook kicked off her AI campaign by coming in below 50 on each of her first seven performances, a dubious feat exceeded by only one other contestant (and speaking of things we don't even want to think about....)  Still, after the first five misfires, her singing and confidence stabilized considerably.  By the time she was finally sent packing, she'd turned in four decent-to-good performances in a row according to web reviewers, many of whom were nonetheless still calling for her to depart their television displays posthaste, just more politely.

In short, as we noted and quoted in that earlier article, KLC's story arc originated in wretchedness and terminated in mediocrity.  All joking aside, that's nothing to be ashamed of.  In fact, considering the enormous pack of Idols whose lines started and ended in wretchedness, we'd have to say it's a fairly impressive achievement.

Reinhart's arc is similar in slope to Cook's, but her starting baseline was considerably higher.  Thus, instead of pulling herself from cannon fodder to the midcard, Reinhart has pulled herself from the midcard to the Final 4 and is a surprise contender for the whole ball of wax.  That sets her apart from everyone else in the Hot Arc 10 list.  She is, in short, in uncharted territory, and there is no past Idol whom we can look to as a guide for what might happen next.  (If we at the WNTS Offices are being 100% honest with our readers, we've felt that Reinhart's been somewhat overrated by the Idolsphere from beginning to present.  We have no quarrel at all with her 4.09 slope, mind you – we'd just have set her baseline lower than most reviewers evidently did.)

As you see, only 17 of 98 five-time performers have managed to achieve a positive growth arc.  An eighteenth, Aaron Kelly, essentially treaded water for eleven weeks.  The other 80 contestants all backslid to some degree (and remember, we eliminated reprises and Original Winner's Songs™ from the mix, so for once they can't be blamed for fostering failure.)  This is consistent with what we've known for some time and with the formula we employ at Camp Should-A-Been.  When it comes to long-term approval ratings on American Idol, we'd venture to say that Fall Out Boy put it best.

Looking more closely at the top 18, it appears as though far more contestants followed the Cook career path – that is, from not-so-hot to decent – than the Reinhart one.  Only Jennifer Hudson seems to have a trendline lying entirely above Reinhart (though of course, your own opinion might differ.)  Note that Lauren Alaina's arc is also bending upward, but only barely.  Alaina has pretty well followed Kelly's lead, except she cleverly chose a baseline more than 20 points higher.

The bottom third of the chart has its own share of surprises awaiting us.  Plenty of contestants have thrown their Idol careers into reverse and floored it, but only three managed to hit double digits on the speedometer: Chris Sligh, Stephanie Edwards, and Lisa Tucker.  In each case, the singers in question started off with one or two very highly-rated performances, then regressed fairly consistently each week until America finally said, "Uncle!"

Much the same could be written about many others towards the end of the list, in fact.  From roughly #70 on down, you'll find virtually the entire rogues' gallery of contestants who attracted the most brickbats from viewers over the years.

Incidentally, take careful note of the contestants at positions number 56, 57, 64, 69, 74, 83 and 85.  If you were to ask an American Idol fan for the eight most shocking eliminations in the series' history, we'd wager that at least six and possibly all seven would be on the majority of ballots.  Note too that their growth arcs all fell in the bottom half of the list!  That can't be a coincidence, we'd venture to say.

The takeaway here is that it's exceedingly dangerous to post a growth arc much below -2.0.  And that in turn suggests that the most surprising winner in American Idol history wasn't Kris Allen or Taylor Hicks or even Lee DeWyze.  Rather, it was...Ruben Studdard??  Believe it.

Retreat and Reverse Into Victory

More significantly perhaps is this little tidbit: until last season, no contestant with a positive growth arc had ever been an Idol champion!  How scary is that?  In fact, none had made it as far as the Finale.  Even DeWyze, the S9 champ who finally (and barely) broke the trend and who was hailed by many for his improvement over the course of the season, actually more or less broke even.

DeWyze still outdid every other winner, however.  The majority of his peers (indicated by a gold crown) and runners-up (blue diamonds) can be found bunched between roughly 20th and 50th in the table.  Champions, it seems, tend to start strong – often very strong – and then grind out the win, working hard not to give back much ground in the months when contempt is breeding all around them.

Based on this, and barring any Dream On bombshells in the next couple of weeks, we'd cautiously predict the following.  The voters will very shortly make a choice between the two country teens remaining, Alaina and Scotty McCreery.  Two singers of the same genre have never made it to the Finale in the same year, and that trend will not be broken in 2011.  And, whoever survives that shakeout is likely to become the S10 champion, based on their overall consistency.

From the evidence so far, it appears that if you want to make it to the finish line on American Idol, it's de rigueur to get off the starting block quickly.  You don't have to be a pre-season favorite, as the most recent three winners can attest, but you do need to turn in a few strong performances early in your run.  Marathons are rarely won from far behind, and evidently the same holds true for AI.  We'll shortly see whether or not Reinhart can bend that trend.