Is Fourth the New First?

The leadoff slot is still most dangerous on American Idol, but another may be closing fast

Two years ago this week, at the request of the folks at USA Today, the staff at WhatNotToSing.com published a groundbreaking, award-winning study that confirmed what many American Idol fans had long believed:  the #1 performance slot on AI was statistically far more dangerous than any other.

...Um, okay, it wasn't really groundbreaking, just some elementary statistics on an Excel spreadsheet.  And, uh, we didn't win any awards either, although we did receive a nice form letter from Stockholm, plus an autographed picture of Björn Ulvaeus, when we wrote to ask why there wasn't a Nobel Prize for Reality TV Mathematics.  But, we really did show that leadoff singers on Idol went home almost 50% more often than probability would dictate.  Honest.

Fast forward to the present day.  Late last week, we received an email from Brian Mansfield, the keeper of USA Today's excellent Idol Chatter blog.  In it, he noted that three of the four singers who've sung fourth during the Season Nine finals have ended up with the lowest vote total that week: Lacey Brown, Didi Benami, and Michael Lynch.  Brian also observed that Angela Antony's Luck Of The Draw study (which, in all seriousness, does deserve a Scandinavian award or two) predicts that the leadoff spot, and then every three or four spots thereafter, will tend to earn noticeably lower marks from reviewers.

Brian went on to posit as follows:

So here’s my theory: While the No. 4 slot may generally be considered a neutral performance slot, it’s a really bad place to give a mediocre-to-bad performance, and if you give a bad performance and the judges notice, you’re in serious trouble. I suspect that there’s a certain level of competence below which you don’t want to fall if you’re singing in that slot.  Would [WNTS] have any data that could help support or refute that theory?

Awards might be scarce around these parts, but data is not.  We took a look at Brian's conjecture this weekend, which we hereby dub Mansfield's Last Theorem.  (Of course, we expect Brian will have many more theories in his lifetime, but we figured if we gave it a cool name like that, and then managed to prove it, maybe those snobs from Sweden will take notice.  Hey, it worked for Andrew Wiles.)

Our first order of business was to update our 2008 study with the voting results from the past two seasons of Idol.  Once again, to keep things simple, we took into account only Finals episodes.  Also as before, for multi-song weeks, a contestants first performance determines his or her singing spot.  Finally, we considered a Judge's Save to be equivalent to an elimination.  After all, the voters would have sent Matt Giraud and Lynche home if the Fearsome Foursome hadn't intervened. 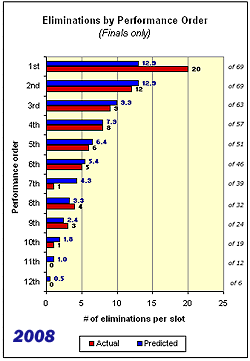 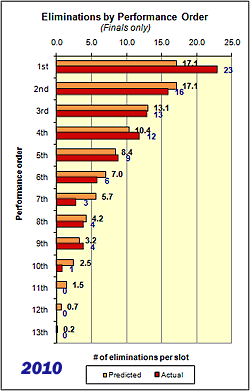 (Apologies for the tiny font size.)  As you see, the leadoff spot remains the most treacherous in 2010; six more contestants have gone home from there than pure chance would predict.  The #4 spot has sent home roughly two more singers than its "par".  The #7 slot still remains the safest, for no apparent reason, but it's starting to come back to earth.  Finally, even after nine years, only one finalist who has sung 10th or later has ever been eliminated: Leah LaBelle in AI3.

The #1 slot's gap of +6 is above the margin of error for 89 trials.  The #4 slot's gap of +2 is not.  So, we can't conclude that the cleanup spot in the batting order is more dangerous than any other slot, although we can say that it's trending towards it.  And that means, sad to say, we won't be catching a red-eye on Air Sweden anytime soon.

For what it's worth (*rimshot*), we also decided to take a look at the WNTS average approval rating for each singing slot (Finals only).  As you know, ratings and eliminations are closely correlated, so we figured that if the #4 spot had an above-average cumulative rating but still sent home more singers than expected, perhaps that would be an indicator that something sinister was afoot.

As it happens, we uncovered something very interesting indeed...just not in the way we expected.

As you see, only our two favorite slots have an average approval rating under the average of 50, and both are well below it.  In fact, taking both the Semifinals and Finals into account, the average rating for the #4 slot has plummeted in the past two seasons.  Since the middle of 2008, there have been no 5-star performances out of the four-hole on American Idol.  The best rating anyone has managed there: 70, done once by David Archuleta and once by Allison Iraheta.

What's going on?  We're not really sure.  Perhaps Angela Antony's research explains it:  there is some sort of bizarre psychological drop-off every three or four singers.  Or, perhaps there's a more mundane factor at work.  Perhaps the producers are consciously putting what they expect to be weak performances in the #4 hole, a very forgettable spot in the first hour of a two-hour episode.  Some people close to the show have suggested that this may indeed be the case.  From here, we'll turn the discussion over to Brian and the regulars at Idol Chatter.

(By the way, to forestall any emails from our more attentive readers:

So is the #4 slot a dangerous place to have a weak performance?  So far we lack enough evidence to declare it so, though we do think that something very odd (and perhaps very fishy) is going on there.  We'll keep an eye on it moving forward.  Who knows: maybe we'll ultimately be able to prove Mansfield's Last Theorem.  In the meantime, Tack, och ha en bra dag!