Earlier this year, there was a lot of discussion around the Idolsphere about whether Season 11 was the "best" in American Idol history.  That talk has died down lately, the result of the usual late-season fatigue among viewers plus perhaps some disappointing eliminations over the past month.  Still, just like arguing in a bar about which was the best sports team ever, it's an entertaining and harmless enough way to pass some time, particularly if beer is involved.  So, as we enter the final two weeks of the 2012 season, let us weigh in on the subject as objectively as we can.  BYOB.

For our money, Season 11 has been reasonably enjoyable.  As with any Idol competition, there has been some things we've liked (the depth of talent and their remarkable week-to-week consistency), some we haven't (the song choices, the incessant duets, and the judges' increasing game-day uselessness), and many that we haven't quite made up our minds about.  We'll cover most of these topics in two weeks, during our season wrap-up editorial.  For now though, suffice it to say that, on the whole, we'd definitely put AI11 in the top half of our Favorite Seasons rankings.

But is it the best ever?  That really depends on your point of view.  If consensus opinion matters, Season 11 has the highest average performance approval rating of any Idol campaign thus far.  This year's Final Three of Joshua Ledet, Phillip Phillips and Jessica Sanchez need only average roughly 45 over the next two weeks to wrest the title from AI10.  Considering that no Finals episode has dropped below 50 all year, one would have to like their chances, though nothing can be taken for granted when reprises and Original Winners Songs™, plus Lord knows how many more duets, are lurking around the corner.

Even so, using the season average as our sole measuring stick leaves a lot to be desired.  It counts every performance equally, whether it came in the earliest semifinals or from the pressure-packed late weeks.  In most years, the 12 (or 13) performances on opening night of the finals affect the season average twice as much as the six from the Final Six show.  Maybe that's how you feel it should be.  Or, like us, maybe you don't.

One thing we do believe is that the Final Seven from AI11 was the strongest in the show's annals.  There was hardly any undercard to speak of this year, and with the arguable exception of Erika Van Pelt, the midcard candidates were the first ones eliminated.  Quite honestly, we don't think any other season even comes close.  We wondered if the consensus web approval ratings aligned with our opinions.  And, that led us to create the following colorful mess of a line chart (with a hat tip to HughC at his AI Stats blog, who produces these wonderful monstrosities all the time.) 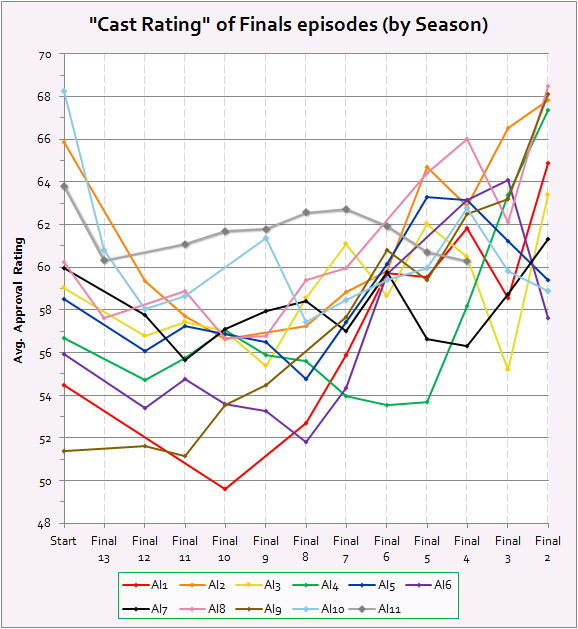 Easy now, because this chart is a lot less complicated than it looks.  All we did is calculate the average approval ratings of the Final N contestants from each year, then plot them along 11 pretty colored lines.  As usual we omitted performances that involved reprises and/or Finale episodes in any way, and we prorated duets and trios so that they count no more than solo performances.  The X-axis specifies the value of N, from 13 down to 2, and the Y-axis is the episode's "cast rating", as it were.

Where there were two Final N episodes in a season (because of a judges' save or another no-elimination scenario), we essentially combined them into one data point on the graph.  For each data point, we only considered the performances up to and including that episode, so that (say) Danny Gokey's legendary meltdown in the AI8 Final Four has no bearing on the cast ratings from the Final Five on back.  Honestly, it doesn't get much simpler than that around these parts.

Note first that there has been only one (1) Finals episode in all of Idoldom in which the average contestant rating (after the show was over, remember) fell below 50.  And that one was, in fact, the very first one ever staged, back in Season One, the red line in the graph.  Its ten finalists came out of the Semis with a relatively low 54.4 average (denoted by the leftmost column in the chart, labeled "Start"), and they promptly tossed out a 44-rated stinker on Motown Night.  By the end of the evening, they were collectively at 49.6, the Idol nadir to date.

So, you ask, what happened the following week to cause them to jump three points to a 52.7?  That must have been a fantastic show!  Or, uh, not.  In fact, the Final 8 episode, featuring a 1960s theme (because, then as now, the producers were allergic to modern music) was hardly any better, averaging just 47.8.  So how on earth could those turkeys gain three points?  Simple: it's because Jim Verraros (average rating: 17.0) and Ejay Day (36.5) were watching from the comfort of their living rooms.  American Idol eliminated two contestants the first week – the viewers probably wished it was more – and that left the Final Eight singers far enough above 50 that, even after their weakish sophomore outing, they were still above par when it was through.  Addition by subtraction.  See how this works?

In fact, as you peruse the chart, you'll notice a lot of stunning climbs and precipitous falls along each season's line.  Do not make the mistake of assuming that that particular show was especially good or bad.  Much more often, it's because (in the case of a rise) a relatively weak singer had gone home the week before, and (in the case of a drop) vice versa.  To illustrate this, note the outrageous spike in the purple line, representing Season Six, between its Final Seven and Final Six.  Now recall who finished in seventh place that year.  Any further questions?

You'll find many similar fascinating nuggets of interest as you study the chart.  Here are a few of our favorites:

As for Season Eleven, the blue-gray line on the graph...well, it has a lot of hardware in its trophy case already.  Highest cast rating for the Final 11, check.  Highest for the Final 10, check.  Final Nine, Final Eight, Final Seven -- check, check and check.  In fact, it technically holds the record for the highest Final Six as well, because Season Eight, the pink line, didn't have a Final Six show – owing to a Judges' Save, they went directly from Final Seven to Final Five  AI11's run of sustained midseason excellence will be tough for a future season to beat.

Since the Final Seven, however, a series of non-optimal eliminations...plus, ahem, the producer's highly dubious time-killing strategy involving duets and trios...have really taken their toll.  In just the past two weeks, AI11 has fallen from the head of its class to (*gulp*) third from the bottom!  It's true: only AI4 and AI7 had Final Fours with a lower cast rating.  How quickly things can change around Idolville, huh?

(If you're saying to yourself, "Come on, how much could the duets and trios really have hurt?", the professional academic answer is "A Whole Freaking Lot Of Hurt, All Right?"  Take away the group numbers and AI11's cast ratings the past two weeks would have been more than two points higher.  Instead of being in ninth place at 60.3, this year's Final Four would be at 62.4 – middle of the pack and just a fraction of a ratings point out of *second* place all-time.  We'll have more to say on this topic – oh, will we ever – in our season recap in two weeks.) 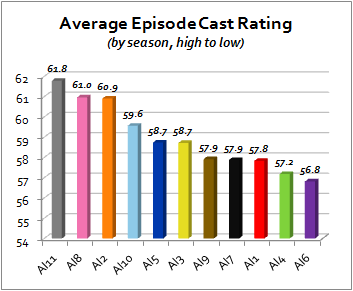 If you're statistically inclined, you might be thinking to yourself, "Maybe the best measurement of a season would be Average Cast Rating over all its Finals episodes."  We thought likewise, so we ran the numbers and the result is what you see at right.  You may find its ranking of the eleven seasons to be a spot-on revelation; however, we'll just say we have some substantial quarrels with this ordering.  Back to the drawing board.

Perhaps semifinals should be included?  Perhaps some episodes should be weighted more than others?  Are there other factors that should be brought into play (e.g., as with AI8 for us, the amount that the producers royally ticked us off as the season progressed)?  And, did we miss any points of supreme interest in the main graph?  This is a job for the analysts of the Idolsphere.  If you would like to take this study to the next level, whatever that may be, you can download the list of Cast Ratings for each episode and have at it yourself.

We recognize that no combination of WNTS approval ratings will ever settle this dispute.  Deciding on what makes up the "best" season is ultimately a matter of intense personal taste.  Still, as we reach the AI11 wire, it's important for every serious American Idol fan to decide what they did and didn't like about this season, and to be sure to let the producers know about both.  We'll take our turn at that in a couple of weeks.