In last week's editorial, we used two absurdly large scatterplots to show that there was a direct correlation between song ages and increasing approval ratings on American Idol.  But then, we already knew that.  This week, we're going to use a new scatterplot to see whether or not there is a correlation between song repeat factors – that is, the number of times previously a song has been performed in competition – and declining approval ratings.  But then, we already know that, too.  Look, if you want thrilling, edge-of-your-seat suspense, go rent Alien. 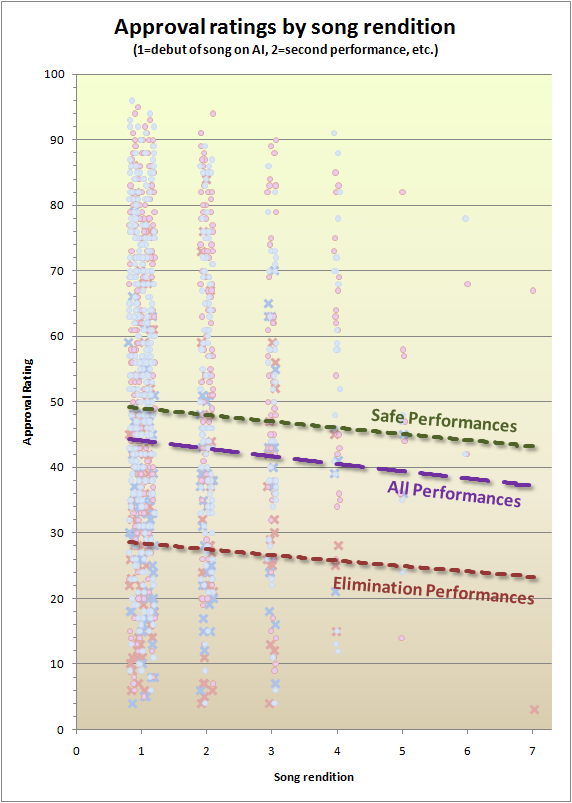 Rarely have we published a more boring graphic.  Yep, approval ratings definitely trend downward the more times a song is sung.  Yes, this applies roughly equally to both "safe" and "elimination" performances.  The slope is roughly 1.3 rating points for every previous rendition; that is, if you sing a song for the sixth time, you can expect to lose about 6.5 off your approval rating solely for having annoyed the Idolsphere.  However, the slope really isn't all that steep – certainly, it shouldn't be enough by itself to steer a contestant away from a song that's only been performed once or twice before.

And that concludes this weekend's editorial.  Tune in next Sunday when we...huh?  Well geez, is there any law against us putting out a really short editorial once in a while?  There is?  Oh.  Um, okay...we'll have to figure out something else to write about today – something that doesn't really deserve a full article, but which is reasonably entertaining and informative nonetheless.  Let's see....

We are frequently asked by our readers to do an Idolmetrics study on song genres (pop, R&B, country, etc.)  Are some genres safer than others?  Is R&B music the best liked by viewers and country the least-liked, as the conventional wisdom goes?  Whatever genre Against All Odds qualifies as, can we have it banned?  That sort of stuff.

We've politely demurred on this task for several years, primarily because we're not confident we have the right data.  We do maintain song genre information in the database.  However, we only list one genre per song, even if it's a crossover hit that could just as smoothly fit into two or even three different genres.

Moreover, we've only associated genres with songs, not performances.  Back when we launched Project WNTS in 2005, it never occurred to us that, say, Hello would someday be turned into an alt-rock number, or that You Give Love A Bad Name would be beat-boxed, or Eight Days A Week would be (*shudder*) countrified.  The fact is, over the past four seasons, the Third Epoch contestants have regularly broken down and reconstructed songs of every style into every other style.  In our DB, however, "Hello" remains forever and for always an R&B song, just as "Bad Name" is listed as rock and "Eight Days" is pop.

With that said, and with some free space on our hands, here's the data through the S10 Final 6.  As usual, we have omitted reprise performances and those from Finale episodes.

"Other" is a catchall for jazz, reggae, gospel and Christian, and obviously seven trials is far too few to draw any conclusions, so we'll just ignore it.  Not surprisingly, Big Band / Standards has been the most-liked genre so far.  Rock and R&B have roughly comparable approval ratings, but as you see, R&B has sent home a substantially larger percentage of singers.  Similarly, Pop and Motown have been equally well received, but their elimination rates are largely in line with their approval ratings.

Bringing up the rear, by a lot, is dance music.  Be it disco, techno or Latin, neither the web reviewers nor the voters have shown much love to Idols who want to shake their booties on national TV.  There have been just two 5-star performances of dance music in American Idol's ten years.  And, one of those has a gigantic asterisk by it: Kris Allen's 85-rated acoustic reworking of She Works Hard For The Money.  (The other was Diana DeGarmo's 83 for No More Tears in AI3.)

Whither country & western?  Its average rating is right around 50, but two numbers in its row stand out.  One is its elimination percentage: at 15.4%, it's the safest of the eight genres we track, including Big Band.  The other is its standard deviation, nearly 20.  The inescapable conclusion is that country music on American Idol definitely has a love-it-or-hate-it flavor to it.  But the viewers who love it, vote.