AI needs newer songs for it to remain relevant, but older ones to remain watchable.

In 15th century England, subjects of King Henry VI faced an unappetizing choice when the tax collector came to their door.  If the owner's house and land suggested that he lived in luxury, he would be taxed heavily, because it was evident that he had substantial wealth to contribute to the king.  If on the other hand he lived in relative modesty, he would still be taxed heavily, because he surely was, in the words of the edict from the Lord High Chancellor, "...a money-saver of great ability."  The Chancellor in question was one John Morton, who doubled as the Archbishop of Canterbury and later was the executive founder of the U.S. Internal Revenue Service.

OK, we kid about that last part.  However, both Morton and his taxation policy were very real, and they're the origin of the modern-day expression, "caught on Morton's Fork" – the classic damned-if-you-do, damned-if-you-don't dilemma.

Considering the amount of money 19E rakes in every season, we doubt Simon Fuller and friends worry too much about what effect conspicuous consumption will have on their tax returns.  However, American Idol itself faces its own version of a Morton's Fork every Wednesday night, musically speaking.  With this week's Elton John episode in the books, the average song age for Season 10 thus far is 28.3 years.  That's second oldest among AI's ten campaigns (see nearby chart).  Coming out of the semifinals, the mean was 23.3 years; since the finals began, it's been 31.5 and rising steadily. 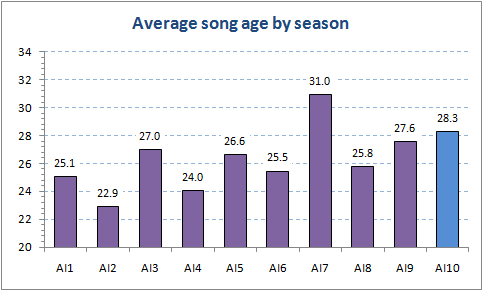 If the producers and contestants go with an episode full of golden oldies, as has been their practice of late, American Idol risks coming off as irrelevant and decidedly un-hip to younger viewers.  Given that the under-30 demographic is responsible for a disproportionate amount of music downloads and concert ticket sales, it would seem like a no-brainer not to alienate them, no?  Besides, there's more money in it for 19E down the road: our friend and colleague The Idol Guy ran the definitive study of how a contestant's average song age during his or her run on the show correlated to his post-Idol success.  He found that contestants who chose newer material fared substantially better in the marketplace than their classics-singing counterparts.

But, alas, there's another tine to Mr. Morton's fork.  As you may have sensed, older songs tend to earn slightly higher approval ratings from web reviewers than newer ones, all else being equal.  In fact, ah, it's more than "slightly."  It's a lot.  A scary lot.  Enough of a lot to make Nigel Lythgoe lie awake at nights and convince himself that, hey, one more Great American Songbook theme won't be that big of a deal, really.

Let's take a closer look at song age as it pertains to approval ratings and elimination rates on American Idol.  We won't be bringing any forks along, we promise.  However, if you're like the staff at WhatNotToSing.com, and you really, really want to see AI showcase young singers performing contemporary songs (and this despite the fact that two-thirds of our editorial staff prefer paper cuts and iodine to Ke$ha and Li'l Wayne), we'd better warn you up front to remove all sharp knives from your reach.  This is going to hurt.

Just Take Those Old Records Off The Shelf...

Through ten seasons, one trend is apparent: left to their own devices, American Idol contestants consistenly choose newer songs than those the producers foist upon them.  The chart below shows the average song age per year between the semifinals (which are almost always unthemed) and finals (where themes are the norm.) 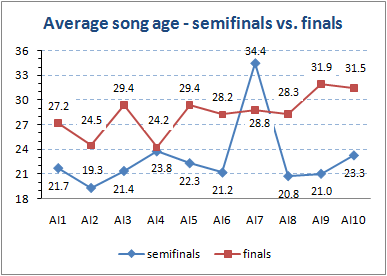 As you see, the only significant hiccup occurred in 2008, but it's the proverbial exception that proves the rule.  Season Seven was when the producers instituted themed semifinal weeks — 1960's, 1970's and 1980's — forcing the average song age to an ungodly 34.4.  This less-than-noble experiment was mercifully abandoned after just one year.

We then asked ourselves, what sort of correlation is there between the average song age of a given season and its average approval rating?  We hoped to find, of course, that the younger the music, the higher the rating.  We'd even settle for a "no correlation" result.  We got neither.  To cut to the chase, the correlation coefficient between the two data sets was 0.174, which meant that there was actually a small bias towards younger music and lower ratings.

When next we broke the data down by musical decade (see Figure 3), the bias became crystal clear.  To quote the noted animated American philospher Norville Rogers: "Zoinks!" 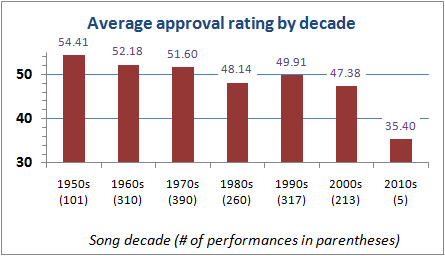 Songs from the 1950s and earlier were the best liked by web reviewers, averaging out to 54.4.  The 1960s and 1970s, comprising precisely 700 performances, were also solidly above the average of 50.  And from the Eighties on, every decade fell below average, and the Aughts in particular were well below average.

Incidentally, though there have been only 5 performances of 2010s songs thus far, note that the new decade is off to a rip-roaring start.

Okay, we thought, perhaps all hope is not yet lost.  After all, The Idol Guy's study showed a strong long-term win for contemporary material.  Could it be simply that while older tunes were better received, newer ones provided a better margin of safety in terms of expected elimination rate?  If so, it would encourage smart contestants, whenever possible, to choose more modern material.

This turned out to be rather tricky to prove or disprove.  Many AI themes shoehorned the contestants, either by force or by choice, into relatively narrow song age ranges.  For example, in this past Wednesday's Elton John show, 10 of the 11 songs were from 1970 through 1976 (with 1983's I'm Still Standing the only exception, not that it did Naima Adedapo much good.)  We thus restricted our study set to episodes featuring songs from at least three different decades; about two-thirds qualified.

We ran out of time this weekend to create a chart illustrating the results, but the short answer is: no luck.  The 1950s and 1990s had somewhat lower elimination rates than their average approval ratings would predicts.  The 1970s and 2000s suffered slightly higher rates.  It all roughly balanced out.  (And before you write us: yes, we did check to see if the big drop-off in approval ratings for more contemporary material had anything to do with the fact that semifinalists on average are weaker than finalists.  Answer: a little, but not nearly enough to explain the discrepency.)

The bottom line, as much as it grieves us to admit it: older songs tend to score better with the audience, newer songs score worse, very contemporary songs score MUCH worse, and the elimination rate for each decade is pretty much in line with its average rating.  In short, there might be a slight advantage to choosing older son--...uh, that is to say, perhaps it's a bit more prudent to avoid new--...er, we mean...  Oh, poop.  Older songs are better liked and safer.  There, we said it.  Bleah.

The Continuing Tale of Mr. Morton

While we're not exactly jumping for joy about these results, we'd encourage the producers not to kick up their heels either.  Morton's Fork is still very dangerous.  We have no way to prove it, but we think even 19E would concur that it just can't be right to have American Idol continually feature songs so old that even Bowling For Soup didn't bother to snicker at them.

Why are older songs safer?  Well, at least we're confident we know that answer.  The American entertainment industry is all about the here and now.  All major industry awards, be it Oscar or Tony or Emmy or Grammy, tend to be as nearsighted as Mr. Magoo.  In Hollywood and New York and Nashville, one year is about as far back as anyone seems to be able to remember.  As such, every winter these various acadamies manage to embarrass themselves by bestowing a major award on something or someone that will be thoroughly forgotten five years hence.

When it comes to the arts, there is one and only one reliable test of worthiness: the test of time.

Having lived through it firsthand, your sage WNTS senior editors can assure our younger readers: yes Virginia, there were no shortage of hit songs from the 1960s and 1970s that, in a word, stunk.  Radio stations stopped playing them as soon as they dropped out of the Top 40.  Music aficianados forgot about them almost as quickly.  No one felt any particular obligation to keep a mediocre song alive for future generations to yawn at.  Conversely, there are dozens of well-known, highly regarded songs today that flopped miserably when they were released as singles.

When an Idol contestant is compelled to sing an older song, they will tend to choose one that's familiar to them, from a list that has been constructed and vetted by music professionals.  Consequently, it's almost invariably one on which Father Time has bestowed its blessings.

When they decide to perform a contemporary song, however, they're on their own - Time hasn't had, uh, time to weigh in yet, so the Idol has to trust his own instincts, tastes, and musical judgment.  The average age of an American Idol contestant is 22.6.  Enough said.

We still think it's important for AI to modernize its songbook.  At the very least, we think it's absolutely crucial for them to retire songs that have been sung, say, three times or more times.  But alas, it seems that Rev. John Morton, one way or another, will have the last laugh.  As another old saying goes, the only two certainties in life are death and taxes.  Speaking of which: if any future Idol sings Against All Odds or Don't Let The Sun Go Down On Me even one more time, they're not gonna make it to the "taxes" part....