A mind-boggling Top 16 Results show puts a damper on AI9...but all is not lost.

Feeling any better today?  No?  (*sigh*)...Neither are we.  The word "shocking" gets thrown around much too often in regards to American Idol, but this weekend, it's about the only printable adjective available.  The Season Nine competition has already taken we fans on a dizzying rollercoaster ride from despair, to relief, to guarded enthusiasm, and back to despair.  And it's not even spring yet.

Like most of you, your humble WhatNotToSing.com staff watched this week's performance episodes and came up with a short list of potential Finale prospects – contestants whom we didn't necessarily love, but who we thought were promising and interesting singers with growth potential; ones who would keep us tuned in through May.  Our list numbered seven; yours may reasonably have run to eight, nine, or even ten.

Now, for us anyway, seven is a pretty decent number at this stage of the competition.  Only Season Five clearly had more Finalists with "Wow!" potential, whilst a few others (including AI8) were on a rough par.  All of the front-runners had undeniable talent, but each also had a few readily apparent flaws.  The competition would come down to who could showcase their strengths while correcting (or effectively hiding) their weaknesses throughout the grueling theme weeks.  And that, dear readers, is the basic recipe for all good American Idol seasons.

Alas, on Thursday evening, the soufflé fell with a thud.  Three of our seven short-listers were sent home, each elimination more brutal and unexpected than the one preceding it.  From where we sat, only Todrick Hall remotely deserved his pink slip...and even then, despite all his vocal misadventures, he was imaginative enough that we wouldn't have quarreled if America decided to give him one more chance.

And now, it seems, we're destined to spend two dreary months picking off the numerous hindmosts on the "undercard" (as our colleague The Idol Guy likes to call it), one by one.  Four of the Final Five seem to be complete no-brainers.  Half the Idolsphere, it seems, has declared in disgust that Season Nine is dead to them.  They claim they are "so over" this show, and that they will be not be watching it again until Season 82 at the earliest, should they live so long.

Except you know they will.  And so will we.  Before we explain why this is so, let's take one last, painful look back at this week's vote.  Because in madness, one can often find method.

We can dispense with a few commonly-cited canards right off the bat.

So much for what probably didn't cause the March Massacre.  Which of course begs the question:  What did?

From where we sit, it appears there were three major factors.

The first is that old standby, the dreaded Sesame Street Effect.  Take careful note of the web approval ratings for this week's shows (links: Girls and Guys).  Note that in each case, there were two performances that lagged far behind the other six.  For the ladies, Katie Stevens's and Paige Miles's ratings combined (23 and 14, respectively) were still less than that of sixth-rated Katelyn Epperley (39).  For the gentlemen, Andrew Garcia (22) and Aaron Kelly (23) were both a full "star" behind Todrick Hall (43).  The other ten contestants all broke 50.

The SSE predicts that when there is a substantial gap between the two least-liked performances of the night and the rest of the field, both perpetrators will be safe, and the third-lowest contestant is in grave danger.  Thursday would seem to be a textbook case in stereo, with the kicker that, because this week featured two double-elimination episodes, the Effect claimed two additional victims.

Factor number two has been discussed at length on several websites this weekend.  On American Idol, there is a fundamental principle of natural competitors.  To make this point succinctly: if you are a fan of offbeat, alternative-folk female singers, you had an abundance of choices in AI9.  But, if you're a fan of R&B women, your choices were to vote for Miles or to find something else to do on Tuesday nights this spring.  There is nothing insidious or inappropriate about this, no matter what the demographics of the beneficiary or the victim.

The producers really cannot do terribly much about these first two factors.  Not so the third.

As we showed last year in the essay "Indecent Exposure", the single strongest factor in determining a contestants' shelf life in the competition is the amount of pre-semifinals promotion they were accorded by 19E.  Those who received up-close-and-personal "Pimp Pieces", featuring Idol cameras following them to their homes and workplaces, were far more likely to advance than those who only had their audition aired (including perhaps a short, shot-on-site intro video).  And, those with "audition" exposure were in turn were more likely to advance than those poor wretches whose first introduction to America came during Hollywood Week or later.

So how does that study's conclusions hold up in Season Nine?  Have a look:

Certainly the low-exposure group held their own this year against the Audition folks.  But yet again, pimp pieces trump all.  Six of the eight contestants who enjoyed one are still alive – a 75% survival rate, which is comparable to past seasons, despite the lowest collective average rating of the bunch.

We do understand why 19E chooses to spotlight a few contestants in the early going.  Allowing the audience to make a personal connection or three allows them to become more engaged with the season as it unfolds, and hence boosts ratings all spring.  It makes perfect sense...from a business standpoint, anyway.  But Promo contestants have a huge advantage among the voters, one that our studies have shown is still felt even in the late stages of the competition.

The always-lurking danger is that if 19E chooses their Pimpees unwisely, it can skew the results in most unfortunate ways.  Thursday was a prime example.  Note that three of the four contestants "saved" by the Sesame Street Effect also happen to be among those who recieved Promo exposure.  And of course, note too that all four eliminees can be found in the Audition or Late group.

What else is there to say?  Unless and until American Idol gives equal promotion to every semifinalist, from #1 to #24, then outrageous voting results will occur on a regular basis.  19E made a number of worthwhile and welcome changes to the franchise this year, presumably to atone for their many sins of Season Eight.  Still, one more change needs to happen, pronto.  For Season 10, why not greatly shorten (if not eliminate entirely) the dreary four weeks of audition shows, and spend that time in extended Hollywood coverage?  Hollywood Week is miles more interesting anyway, and such a cut-to-the-chase format would kick-start the new season while giving the producers ample time to spotlight each of the 24 people that America will soon be judging.

A dozen-plus paragraphs ago, we mentioned that there was still one compelling reason not to give up on Season Nine, despite last Thursday's debacle.  Before we get to that, however, here's one final statistic to feed your outrage.

Every March, large swaths of the Idolsphere bellyache that "This year's contestants are nowhere near as good as last season's, or the one before that, or (insert favorite season here), or..."  Last spring, by way of reply, we yawned and produced a chart that showed that the average rating of each season's Finalists is consistently in the 55 to 60 range.  (The one exception was a huge spike for Season Two, when many contestants peaked early.)  We decided to see where AI9 fell on this scale, and the result is the updated chart you see below. 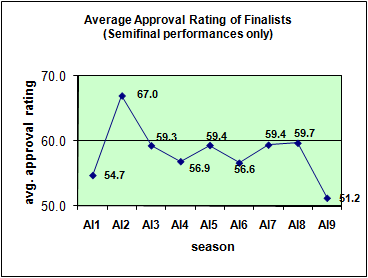 In short:  this year, the bellyachers are dead-on.

To make matters even more painful, had America merely voted off the four contestants who posted the lowest-rated performances this week, the Finalists' average would have risen to a very respectable 56.  (And yes, that's with Lacey Brown and Tim Urban in the field.  Past train wrecks aside, they sang well when it mattered most, and we can only tip our caps to them for coming up big in the clutch.)

So what on earth was that reason to stay tuned in this year?

Simple.  As we noted, every year around this time, the WNTS staff makes a short list of the contestants who we feel have shown the most potential thus far, and who we believe can be considered worthy contenders for the crown.  Last year, for instance, our roster of finalists numbered seven – the same number we'd have had this season had Epperley, Alex Lambert, and Lilly Scott made it through.