When American Idol showed Kristy Lee Cook auditioning with the 18th-century hymn "Amazing Grace" this January, who knew it would be a harbinger of things to come? On Tuesday, May 20th, the night of the 2008 Finale, USA Today published a feature article by entertainment writers Bill Keveney and Edna Gundersen which referenced a key statistic from WhatNotToSing.com, one that we'd been tracking for about a month. Many viewers have observed that the music of Season Seven seemed older than ever, but is that perception really true and if so, by how much?

The formal answers are (a) Yes, and (b) By so much that if one of the Davids sang something from Saturday Night Fever in the Finale, the average song age would have decreased. Really. The typical song of AI7 is too old to audition for the show. As the first chart below shows, at 31.0 years, it's almost four years older than the second-most geriatric season (AI3) and six years older than the average of the first six seasons. 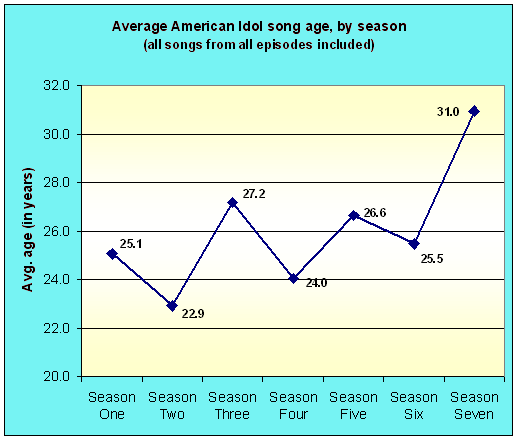 As jolting as that graph may be, we don't think it quite tells the full story. AI7 managed to go all geriatric without even holding a Big Band / Great American Songbook theme week, a staple of previous seasons. Those shows featured songs that were often upwards of 60 years old and were meant as a change-of-pace. Like figure skating judges, let's throw out the extreme highs and extreme lows – namely, Finales (which feature brand new Original Winners' Songs that virtually no one wants to hear anyway) and songs from the oldest episode of each season, whatever its theme might be. This will show how the typical, week-in/week-out songs compare: 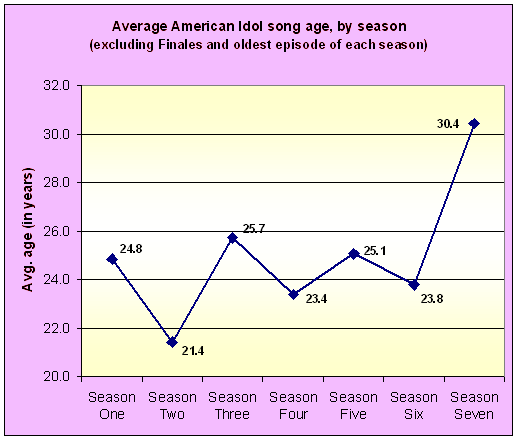 Why are this year's songs so much older? Our belief is that it has everything to do with one of the more popular innovations of AI7: MP3 downloads from iTunes. Not only do the producers have to acquire copyright clearance to perform a song, but also additional clearances to record and sell a cover version. (The best and clearest explanation we've read of the various licenses and permissions required to perform a song on television comes from liedenfrost, a regular poster at FansOfRealityTv.com.) These clearances are easier to obtain and far less expensive for older material.

In the USA Today article, Idol producer Nigel Lythgoe calls this season's music "superb" and says songs today are not as melodic as they once were. We'll concede that last point moreso than the first; however, someone might want to remind Lythgoe gently that his job is to find talent that will sell singles and CDs to the less-melodic-music-buying public of 2008...not 1976, the median song year of AI7. The series has shed almost 15% of its teen/tween audience this year. American Idol had better be selling a boatload of iTunes downloads to make up for that.